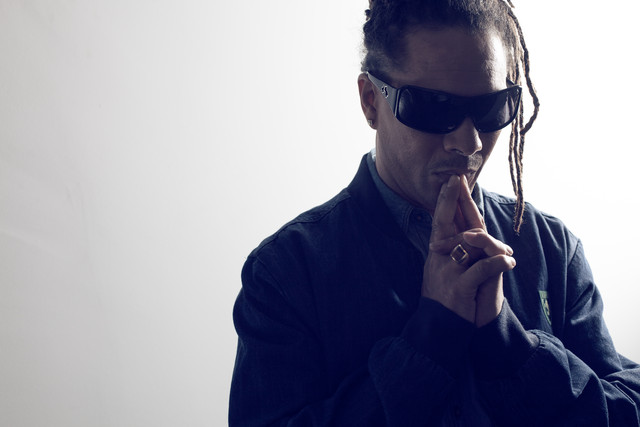 Bristol native Roni Size is one of the most respected junglists, with production credits spanning dozens of labels, projects, and releases, from stripped-down underground classics like "Time Stretch" to the smoothly sophisticated Top 20 U.K. pop hit "Brown Paper Bag." Although not as quick to rise to acclaim as peers such as Goldie and LTJ Bukem, Size's influence as a producer, label owner, and committed underground magnate figured him as one of the emerging sound's true pioneers. The breakout success of his debut album New Forms -- a Top Ten hit in the U.K., where it also won the Mercury Prize -- vaulted him to a greater degree of popularity than any other drum'n'bass producer. After a break during the early 2000s, Size resumed activity with new productions, a reworked version of New Forms, and performances that continued to fuse electronic and analog elements. Born to Jamaican immigrant parents, Roni grew up in the Bristolean suburb of St. Andrews (home to Tricky, Massive Attack, and Smith & Mighty), where he learned the fundamentals of hip-hop through the area's sounds systems, house parties, and underground clubs. Expelled from school in his mid-teens and running game through his neighborhood until risk became greater than reward, Size started dabbling with house and reggae production in the late '80s. He hooked up with labelmates DJ Krust, Suv, and DJ Die at the 1990 Glastonbury Festival, and the four stayed in contact, eventually forming Size's longest-running musical commitment to date: his own Full Cycle label. Formed simply as an outlet for the four's entree into the nascent drum'n'bass scene (Krust and brother Flynn [of Flynn & Flora] were already working with Smith & Mighty, while Die was producing hardcore tracks as Sub Love), Full Cycle eventually grew into a label group, releasing a steady flow of 12"s (on both Full Cycle and Dope Dragon), and a label comp, Music Box, in 1995. Oft duplicated, the Full Cycle sound is a subtle mix of jazz and soul with jump-up rhythms and worldbeat references spanning from Size's Jamaican roots to '50s bop and the Motown sound. Although hardly popular in the days before ragga (then jump-up) ruled the decks, the crew now counts a number of classics among their credits, including Size's "It's a Jazz Thing," Krust's "Jazz Note," and Reprazent's Reasons for Sharing EP, the crew's first outing through Gilles Peterson's major-label subsidiary Talkin' Loud. The success of 1997's New Forms launched Size to the top of the electronica genre, and the Dope Dragon label continued to rise in the ranks of dubplate hysteria, with tracks from Selector Owoy, Gang Related, and Mask consistently passing muster on most DJs' decks. After a relatively silent 1998, Size returned in 1999 with a new project -- Breakbeat Era, with DJ Die and vocalist Leonie Laws. The trio released Ultra-Obscene in the fall of that year. In 2000, Size returned to the Reprazent project with In the Møde, boasting sit-ins from Method Man and Rage Against the Machine's Zack De La Rocha. Though it did chart in the U.S. for one week, it failed to truly cross over or build his fan base. That year, Size also mixed the Full Cycle release Through the Eyes. Following a period of inactivity, Size returned to solo productions with 2002's Touching Down, a primarily solitary affair, and 2005's Return to V, with vocals contributed by the likes of Jocelyn Brown, Beverley Knight, and Reprazent's Dynamite MC. Both of these albums were presented as DJ sets. Size re-edited much of New Forms and combined the results with new cuts as New Forms 2, released in 2008. He and Reprazent continued to tour and played at European festivals such as Glastonbury and Bestival. After a Roni Size/Reprazent performance with William Goodchild and the Emerald Ensemble was documented with Live at Colston Hall, New Forms was expanded and reissued in celebration of its 20th anniversary. ~ Sean Cooper, Rovi