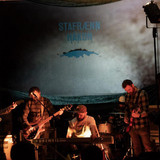 Stafrænn Hákon is the stage name used by Icelandic musician Ólafur Josephsson. Ólafur has been making music on his own as Stafrænn Hákon since 1999. Since 2011 Stafrænn Hákon has been working as a 5 piece band and their 11th full length album entitled „Aftur“ was released through Darla Records in 2019. Stafrænn Hákon has collaborated with a broad range of artists and musicians and was aired at the late John Peel´s radio sessions amongst others. He has released material on The U.S based indie label Secret Eye, Resonant Records, Awkward Silence, Chat Blanc, Japanese Nature Bliss & Happy Prince as well on the Darla Records. Stafrænn Hákon´s core consist today of 5 members; the two guitarists Ólafur Josephsson and Lárus Sigurðsson, Árni Þór Árnason who plays bass guitar, Róbert Már Runólfsson who plays the drums and aforementioned Magnús Freyr who is the main vocalist. Together they create a rather tight, melodic sound world. Suffice to say „Aftur“ their most recent album, is the bands most refined and mature album to date.