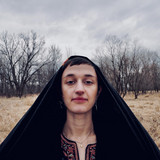 Anjali Rose siphons blocked channels of the restless mind through melodic characterizations of our human existence. With repurposed 7th chords, electronic textures and amassed live sounds of bugs, birds, industry, band practices and conversations Anjali paints musique concrete to backbone the chills and trance of her flavorful voice. Raised amidst the monotony of central New Jersey's suburban sprawl with South Asian cultural pressures to pursue science; Anjali only began manifesting her songwriting prowess in her early twenties while living in Western Massachusetts where she joined her first band "Sapphic Prince". Soon after the formation of "Ginger Libations", a 5 piece band emerged to cultivate "Marrow", the first release from Anjali and her collaborators. This bi-racial, queer artist finds comfort against the grain and seeks truth in her sound through cross cultural collaboration to form new genres, and a unique sound. Through nomadism, mindfulness, and wanderlust Anjali has traversed her solo work as an independent artist throughout Europe, Canada, and the USA. She stews currently in Brooklyn NYC where new collaborators inspire transcendence in her form with plans to release many singles and a full length album in the near years to come. When not musicking, Anjali can be found dancing with visual art through Ananda Luna Productions, a freelance artistic exploration in non fiction, experimental, and portraiture based video and photography.