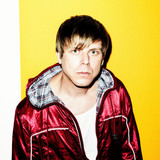 Patric Catani, musician & producer of a wide range of live projects and music for video games, such as Pit People , Battleblock Theater by The Behemoth , a cult game developer based in San Diego California. Currently working on

Alien Hominid Invasion OST (Beta). He started making music in his kids room 1992 on his Amiga Homecomputer and his signature sound got him to release music on various international labels, such as Grand Royal and Wordsound in the United States, Beat ink in Japan and many German / European underground labels. By now, he is involved in about 100 releases with his many projects such as