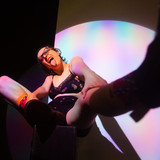 Hailing from Boston, Massachusetts, Emily Ronna spent the first decade of her musical journey convinced she was going to front a punk band. Soon after realizing the marriage of a band didn't suit her, she fled the "altar" for a stab at a solo career in Nashville. Launching the project in the beginning of 2021, Ronna used the first three singles as a way of discussing her mental health and sexuality. Now, with new single "3 Way," she's combining the concepts. Ronna insists her mental state is so erratic that sleeping with her is like having a three-some. She rhymes "depression" with "erection," and frolics around in emo assless chaps in the music video. "3 Way" could very well be a signal for a total breakdown, or a symbol of Ronna's freedom in singing about whatever the hell she wants. Let’s just say it’s freedom.