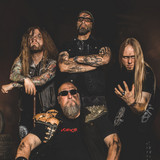 Rage was formed in 1984 under the name Avenger. After releasing their debut album Prayers of Steel and their Depraved to Black EP in 1985, the band changed their name to Rage. Through the years, Rage established themselves as a notably successful band and as pioneers of the Power Metal scene, including in their music elements of Progressive Metal and Classical Music. In 1996 Rage was the first metal band to write and record an album with a full symphonic orchestra: Lingua Mortis. Rage has released 25 Albums over the past 36 years (in total more than 50 releases counting DVDs, EPs, Japan Editions, VHS. A remarkable international success with more than five million records sold, Rage has had more than 40 music chart entries.