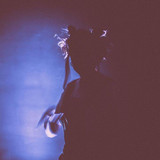 The Hottman Sisters are a three-piece, indie pop/rock band centered around melodic guitar riffs, synth, samples, and tight harmonies.    Sisters Jessica and Heather Hottman officially formed the band in 2015 and as their sound developed, they soon added drummer, Ed Getzlaff. The trio has spent the last few years touring nationally, playing in large festivals such as SXSW and Maha Music Festival. In 2017, the band played over 70 shows and opened for headliners like Run The Jewels, The New Pornographers, Belle and Sebastian, and many others.   Their latest single, Fire, was made available everywhere on August 24th. This single premiered in Atwood Magazine:   http://atwoodmagazine.com/thsf-fire-the-hottman-sisters/   The Hottman Sisters embarked on a three week national tour to support the release of their newest EP titled LOUDER, which debuted on September 28th and currently has over 125,000 streams and rising.    The band is ending 2018 with an east coast run including cities Boston and New York. They plan to release more music in 2019.   IG: thehottmansisters FB: thehottmansisters   Booking: thehottmansistersbooking@gmail.com