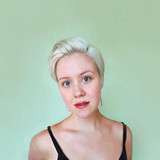 Turtonen is a music producer, songwriter, and performer based in York, UK. She is best known for her YouTube channel ‘LNA does Audio Stuff.’ An innovative music production tutorial channel that is known for its fun and approachable style, and challenges the views on gender within the YouTube audio industries. Through her YouTube channel, she has organized several music collaborations, from which the latest is called "Ninety". It is a song produced by 90 women and non-binary people in audio. She is also the co-founder of Equalize Music Production and she is currently writing her first book. In her music, she is interested in the worlds between electronic sounds and authenticity, as well as the contrasts between genres, languages, and cultures.