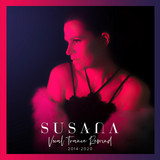 Susana is synonymous with the highest quality in vocal Trance. Her enviable catalogue contains chart topping collaborations with artists like Armin van Buuren, Aly & Fila, Dash Berlin and Markus Schulz, just to name a few. After Armin van Buuren brought her along on the Armin Only Imagine and Armin Only Mirage tours, many global solo tours followed and proved Susana to be a crowd favourite. Her hit releases, powerful voice, strong on stage presence and forward thinking have gained her a legion of faithful fans and established her at the pinnacle of vocalists in the genre. She was voted #1 vocalist in the annual Trancepodium Awards six years in a row (2014-2019). In 2016 Susana teamed up with Aly & Fila and Roger Shah to create the first original Trance track with Spanish lyrics. ‘Unbreakable’ quickly made waves through the Trance scene, resulting in a Beatport #1 hit as well as the track being voted Tune Of The Year by the listeners of Armin van Buuren’s A State of Trance radio show! After this successful collaboration Susana felt it was time to spread her wings even further and released the first of multiple solo singles ‘Only Summer Knows’ in 2017. With performances at Dreamstate, Tomorrowland and Untold Festival as well as hosting her very own Susana|15 acoustic concert in 2019 plus a new single with Ram in the works for 2020, it may be obvious Susana is here to stay! Stay up to date and/or get in touch via www.susanavocalist.com Photography: Momenttom.com