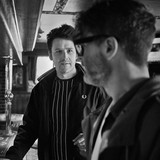 Following a six year hiatus, S&D returned with Boro Kitchen 4AM earlier in the spring. Documenting a chat about Brexit at a Teesside house party, it introduced a raw musical edge from producer David J Gledhill, combined with mature and politically-minded lyrics from Matt Abbott Poet. Where 'BK4AM' brought a raw post-punk energy with it, follow-up #Refugeeswelcome contained elements of jangly upbeat indie whilst still carrying a raucous insistence. Third single Superheroes provided intense, elegant pathos and carries a sound never previously showcased in the S&D catalogue. Album We Are Humans is out now. Lyricist and frontman Matt Abbott volunteered at the Calais Jungle in 2016 and his acclaimed one-man show Two Little Ducks laid the foundation for the new album's lyrics. When S&D first emerged in 2007, Abbott was completing his A-Levels and David Gledhill was producing under the guise 'MiNI dOG'. Northern Soul-inspired tracks about teenage relationships (see Red Lipstick) led to a frenzy and within 9 months they'd signed to Universal. Fast forward to 2019 and Abbott is 30; rapidly establishing himself on the UK's spoken word scene. Gledhill is known more recently for SOULS. Skint & Demoralised have changed, and so has the world around them. Fittingly, their new fourth album ‘We Are Humans’ is completely unlike previous releases, and represents a sharp political reflection of the tumultuous times that engulf us.