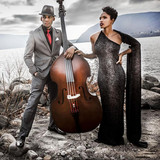 “A velvety mix of Erykah Badu & Billie Holiday paired with the cool grooves of a 007 on bass” is how one reviewer described Acute Inflections, New York’s sultry duo led by a former Broadway singer. They can usually be found entertaining their clients (United Nations, Mercedes-Benz, etc.) at high-end events across the country. They have shared the stage with Jennifer Hudson, Keith Urban, and other notable artists at some of these events. Their first album spent five weeks in the Top-10 of the RMR Top 50 Jazz Chart and had the #1 single for eight weeks. Their second release was a holiday album that was also well-received, and they recently released their third album, Electric Psychology. Between sultry renditions of Nina Simone, Childish Gambino, and original music, it tells the story of how they discovered their connection. These sassy artists are also masters of engaging with an audience, so if you have the opportunity to see them live, prepare yourself. It’s bound to be a fun and enchanting experience!