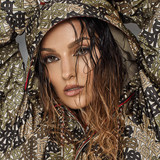 Minelli is a veritable songwriting and production machine. Hot on the heels of many tracks that burst into Top Charts around the world, like numerous Hits for INNA, Sickotoy, Gran Error, PAX or Antonia just to name a few, or #1 of the Charts in Romania, she made her entrance as a front line artist in May 2017 when she joined Global Records and released her first solo single “Empty Spaces”, single which was immediately licensed by Ultra Music and topped the charts in 15 countries. In 2019 she released the hit single “Mariola” and recorded impressive performances. She topped the Romanian Airplay-, iTunes-, TV- and Spotify Viral 50 Charts, got massive airplay worldwide and reached more than 20 million views on YouTube. Moreover, the track was licensed worldwide by RCA/Sony Music, boasting international performances in France, UK, Germany, Russia, just to name a few. Minelli’s next single, the banger: “Discoteka” featuring INNA, a fresh collaboration that mixes enticing vocals, piercing beats and a hypnotizing vibe to create a really cool, quirky sound and visual concept. At the end of 2020, Minelli released "Nostalgic Illusions", a sentimental yet catchy EP, combining two tracks, "Illusion" and "Nostalgia" to create an eclectic fusion of vibrant beats and fantastic vocals. Now, she is impressing her worldwide audience again with a new, fresh single, called “Rampampam”. The artist's latest release is set to make it directly into your playlist!