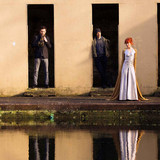 Spiro’s raw, punk-infused take on minimalist systems music and the dark side of folk, charged with the ecstatic influence of the clubbing scene, began life in 1993 at the instigation of violinist and composer Jane Harbour. Jane’s minimalist systems and electronica influences met head on with the punk influences of mandolinist Alex Vann and guitarist Jon Hunt, and the physical ingenuity of accordion savant Jason Sparkes.

Spiro operates as one highly emotionally-charged but exquisitely controlled machine, the parts of which combine in a fierce but tender dynamic interplay. Melodies of classical heft vie with driving rhythmic riffs of unusual spiky beauty in deep layers of instrumental interplay as the intricate musical systems play out – a moving, cinematic, exciting and unique music in which themes are broken and mended again, leaving us in a new musical and emotional landscape.