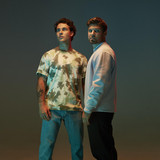 Lucky Rose is producers/DJs Vincent Carrier and Marc-Antoine Thibeault, a French-Canadian duo with their signature mix of bright beats, catchy hooks and organic instruments. It started as Carrier’s solo project in 2015, albeit unintentionally. While remixing other artists from his Quebec City hometown, Carrier wrote original tropical house jam “The Way You Want Me.” When nobody else wanted it, he brought in vocalist Yan Etchevary and released it as Lucky Rose.  Supported by buzzy YouTube channels with millions of subs, the song soon made it to Stingray Music and then Montreal radio. From there, Lucky Rose won Virgin Radio’s Future Star contest, climbed Canada’s Billboard Top 40 and Hot AC charts and got signed by Ultra Music.

Carrier’s next release, “Wild One,” featuring Toronto singer-producer Tep No, was even bigger. Riding soaring synths, acoustic guitar strums and an earworm whistle, it clocked tens of millions of streams, cracked pop radio’s top 20 and went Gold in Canada. Still, something was missing — and that something turned out to be Thibeault, a Facebook friend, DJ and fellow ex-drummer who’d ditched rock for electronic dance music. Complementing each other's skill sets, the pair joined forces in 2017 and put out “Lost” featuring Jordan Hart which again went Gold and cracked pop radio while getting them live gigs.   Now with some hot new pandemic-era productions in hand, Lucky Rose is ready to prove they’re no fluke. BIG MGMT - bigmanagementinfo@gmail.com