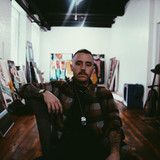 American singer/songwriter Terence Ryan bridges soul and indie rock with a rich voice and passionate sound inspired by Kanye West, Coldplay, Bon Iver, and Frank Ocean. Born and raised in the working-class town of Pembroke, Massachusetts, Ryan is a self-taught instrumentalist who learned piano, drums, guitar, banjo, and bass on his own. While employed as a warehouse worker, the troubadour left the East Coast and headed for Los Angeles to pursue his music. Jobless and homeless, he ended up living in his car, where he wrote and recorded in parking lots and campsites. After issuing his Will Word & Hand EP, he returned to New England in late 2016. Much of the music he recorded while out West would appear on his debut LP, Don't Panic, which he assembled in an old fisherman's house on the shores of Maine. The album featured the singles "Mean It" and "To Live and Die in New England." ~ Neil Z. Yeung