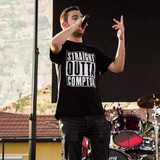 ShortyG is a Romanian rapper, singer, songwriter from Oradea, Bihor. In 2006 he started recording his first songs at Etajul 3 Records while being part of the rap group RapPrezent. In 2007, the group broke up and he started a new group with his former group mate and childhood friend Limbaj. Together they formed a band called CTM. Under this name they have released 2 albums and numerous songs that became popular online. In 2013 he started his independent label Belief Records with his friend Norbert Marton. In 2015, another artist from Oradea (@Acelasi Soso) joined the team and ever since they have been working together.