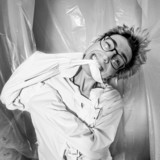 Often described as a genre-bender, Krosst Out has been breaking the mold of conventional music from the get-go. Growing up he was fed a mixed diet of sounds. From his father’s influence of rock and blues artists like Eric Clapton and The Who, his friend’s influence of post-hardcore, and metal bands like Underoath, Opeth, and Rage Against The Machine to sneaking home Eminem, Public Enemy, and Nas Cd’s. The venomous, no holds barred approach to his lyrics has set him apart from the rest his peers. Lyrics that cause introspection, invoke emotion or could insight a riot, the importance of words and their use has always been at the forefront of Krosst Out’s mind. Since the release of LIFEOFTHEPARTY in 2017 Krosst Out has been continuing to build his fan base. Releasing a slew of singles and countless shows across the country. His 2020 sophomore album- Phone Calls With Ghosts has solidified him a spot in the national market as a one of a kind artist who brings an eclectic flavor to the table. Call him a provocateur, call him confusing, but with the embrace of fans from all over the world it’s a sure fire thing that Krosst Out is a rising talent.