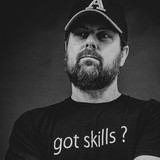 Israeli musician Sagol 59 (Khen Rotem) is widely recognized as the Godfather of the Israeli hip-hop movement, a revered lyricist and a versatile singer and instrumentalist. Being one of the first Hip Hop MCs on the Israeli hip hop scene and a respected music journalist for various publications, Sagol has rightfully claimed his place as Israel’s preeminent hip-hop authority. Since his 2000 debut, Sagol has released 7 albums and has performed extensively in Israel as well as in Europe and the U.S. Sagol's 2011 album, Another Passenger, was a surprising diversion from the Hip Hop genre, focusing on Blues, Rock & Folk, all sung in Hebrew, featuring an impressive list of guest musicians. Among his ongoing activities in the Hip Hop field, Sagol found time to release the acclaimed Grateful Dead Hebrew tribute album The Promised Land. Sagol followed the album's release with a series of concerts both in Israel and across the U.S. In 2019, Sagol returned to his Hip Hop roots with the album "Pirkei Avot" (Veteran Joints), produced by some of Israel's most acclaimed beatmakers and featuring a stellar cast of guest M.Cs.