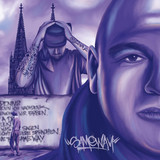 Mic Bles the Oxnard CA mc garnered his recognition as a hardcore lyricist for his variation in rhymes & complex lyricism. Highlighted on several independent releases through the years Bles has become a lyrical powerhouse & staple in the underground hip hop scene. Rising on the international scene for his early works and most notably his album AudiovOX which is a testament to artists of the Golden Era & serves

a reminder of the legacy of Hip Hop culture. The album was released to critical acclaim worldwide .