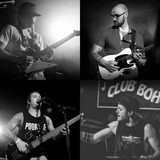 I Am The Owl

Featuring I Am The Owl

I Am The Owl is a Fort Collins, CO based band, founded in 2014. Blending elements of punk rock and metal, the band’s unusual two-vocalist lineup has allowed them to create a signature sound that is truly unique but also eerily familiar. I Am The Owl has shared the stage at some of Colorado’s most storied venues including The Aggie, Summit Music Hall, The Gothic Theatre, and Hodi’s Half Note, opening for national bands such as Millencolin, Norma Jean, Authority Zero, Fit For A King, Agent Orange, and many others. Since 2015, I Am The Owl has released one demo, three 6-song EPs, and one live album. Over the years, I Am The Owl’s sound has gotten increasingly heavy and complex. For their 2020 EP, I Can’t See, the band once again turned to Andrew Berlin (mixing) and Jason Livermore (mastering) at The Blasting Room Studios to help them deliver the maximum sonic impact. The new EP sees the band fully embrace their metal influences while staying true to their punk rock ethos. In 2020, I Am The Owl was voted “Best Punk/Metal/Hardcore Band” by their peers in the Colorado music scene during The Fort Collins Musicians Association’s annual Peer Awards. In 2021, I Am The Owl signed with Detroit-based sync licensing agency Assemble Sound. I Am The Owl is set to release their next single, titled Fear & Loathing, in Spring of 2021.