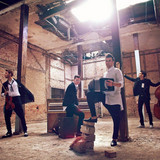 With passion, temperament, and an excellent sensitivity for the Argentinean tango style, these young Polish musicians have conquered the hearts of their audiences worldwide. They are celebrated not only as the best tango ensemble of their generation in Europe, but also as shooting stars of the genre in general. At the age of 15 they won the international competition “PIF Castelfidardo” in Italy in the category “Nuevo Tango” and went on just one year later to record their highly successful debut album “Tango Nuevo by Astor Piazzolla”. With an extremely danceable synthesis of tango and elements of jazz and rock, the ensemble has already caused a sensation numerous times at the most important European tango festivals in Germany, Italy, France, Denmark, Sweden, and Norway, among others. Bandonegro toured Buenos Aires in 2019, thrilling audiences at prestigious tango clubs steeped in tradition as well as the “Argentina Tango Salon Festival”. Their output includes 4 albums, released by prestigious music labels such as DUX. Bandonegro was presented during the finals of the World Tango Dance Tournament – the biggest tango event in the world. “Unusual energy and unique sound. There are only four band members but they sound like a 10-person orchestra!” - Nito Garcia (legendary Argentine dancer)