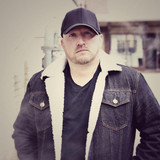 Danny Kensy has that edgy traditional country sound that makes him so easy to listen to. Not too much pop and not too much twang. It's like right there in the middle, perfect! THAT OLD WIND is his latest U.S. major market charted single (charted on TRUE INDIE TRACtion on the 2nd day of release!) while his last 2 U.S. singles, LONELY GIRL & RADIO BACK, charted in the top 50 & 60 on the MUSIC ROW BREAKOUT CHART, top 20 on the TRACTION TRUE INDIE CHART & went #1 on the EUROPEAN COUNTRY MUSIC CHART respectively. With several #1's in the European market Danny has the attention of many listeners who know great country music. His shows extend from the United States to Europe. "Raw", "Extremely Talented", "Dedicated" and "Full of Country Soul" are just some of the phrases used to describe Danny's music. You don't only listen to him, you feel him! This guy has performed with the heavy hitters like Rascal Flatts, Dierks Bentley, Dan & Shay, Brothers Osborne, Brad Paisley, The Charlie Daniels Band, Travis Tritt, Big & Rich, Randy Travis and so many more. 2021 Song of the Year & 2017 Rising Country Male Artist of the Year winner at The Josie Music Awards and winner of multiple song writing and vocal contests. If you like any part of country music you will love Danny. You can definitely feel the hard work and passion he puts into every song and performance. Get to know him and his music!