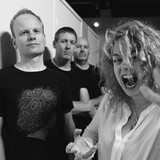 The solid rock music and energy takes hold like a tornado, drawing the listener into it as if in quicksand. Tornadoes and Quicksand is the title of the debut album of Mr. Knowhow. The album contains eleven songs, where Mr. Knowhow reverts to old school ’80s and’ 90s rock and hard rock. Think of Guns ‘n’ Roses, AC / DC and The Black Crows, but with an energetic front woman. Solid and heavy rock that sounds great. Mr. Knowhow was founded in 2008. Over the years the band has released three EPs and evolved from guitar pop to heavy rock and hard rock. The solid rock line has been continued on the new album. The music has always been well received by the public and (local) radio stations. The band has had a lot of airplay and played many live shows in pubs and halls and at festivals in the Netherlands and Germany. One of the songs from the first hour – Remember – has also been re-released via the American label 272 Records. Most of the songs for the new album have been recorded in a live setting. With the fatty and raw mix, the energy can be felt. Something that fits well as Mr. Knowhow is a real live band. The band puts on a tight rock show and front woman Hanny uses the whole stage as her play area. With a real rock ‘n roll attitude Mr. Knowhow guarantees spectacular live shows! --- Mr. Knowhow is: Hanny Wolvekamp (vocals), Wim Ratering (guitars), Wim Huizenga (guitars and vocals) and Arno Wegman (drums)