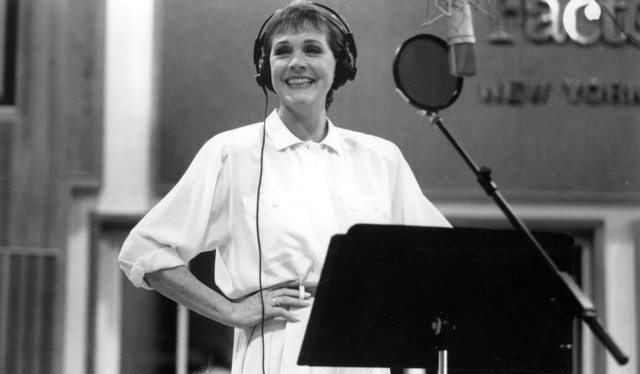 While still a pre-teen, budding singer Julie Andrews (born Julia Wells) joined her parents in their touring variety act; her mother was a pianist, her stepfather a tenor. In 1947, at age 12, she made her stage debut at London's Hippodrome at what turned into a year-long run of the revue Starlight Roof. Though deemed "unfilmable" after an MGM screen test that year, she frequently performed on English radio and television and constantly toured in revues. In 1954, director Cy Feuer cast her in his Broadway production of The Boy Friend and Andrews instantly became one of the biggest stars in musical theater, beloved for her charming stage presence and her clear voice. More success followed in 1956 when she created the role of Eliza Doolittle in My Fair Lady. In 1960, she played Queen Guinevere in Camelot; Walt Disney saw her and cast her in the title role of his movie Mary Poppins, for which she won an Academy Award. The wholesome Poppins image would follow Andrews for years, sometimes to the singer's good-natured discomfort; it dogged her even after performing in such dramatic films as Alfred Hitchcock's Torn Curtain. Andrews didn't shake it until she bared her breasts in the climactic production number of S.O.B., a 1981 film by Andrews' second husband, Blake Edwards. Andrews' most successful film was The Sound of Music in 1965 (she had been passed over for the movie version of My Fair Lady the previous year). Andrews remained extremely popular through the late '60s, but the movie musical fell into decline and Andrews wound up in a couple of expensive flops, so she redirected her career toward concert appearances, television, and children's books (which she initially wrote under the name Julie Edwards). She made a cinematic comeback in the 1980s, most successfully with Blake Edwards' gender-bending cabaret spoof Victor/Victoria in 1982. Andrews reprised the role in Edwards' 1995 Broadway production of that musical, but she turned down a Tony nomination that year because she felt the rest of the show's cast and crew had been overlooked. Among many other honors, Andrews was inducted into the Theater Hall of Fame in 1997 and was made a Dame Commander of the British Empire in 2000. Andrews continued to act in films through her sixties, but a botched throat surgery temporarily sidelined her singing career in 1998.