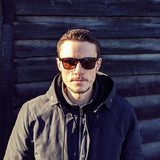 rhubiqs is the solo project of London-based musician Tom Squires. As rhubiqs Squires creates far-reaching electronic and ambient post-rock sounds inspired by the likes of Mogwai, Caspian, Jon Hopkins, Bardo Pond and Boards of Canada. rhubiqs debuted in 2019 with the self-titled rhubiqs EP and quickly followed it with the much heralded Motifs in F# Major EP. Buoyed by the success of these EPs, rhubiqs returned to the studio during the Autumn of 2019 and started work on his debut album. 1st May 2020 saw the release of this much anticipated debut album - Migratory Paths. On Migratory Paths rhubiqs has further honed his warm, well-rounded sound and has included an astounding post-rock cover of Julee Cruise's haunting song 'Falling'; better known by many as the theme tune to the television series Twin Peaks. The record also closes with a remix by Mr. Mitch, the London grime-scene stalwart who calls Planet Mu Records his home alongside electronic greats such as Venetian Snares, µ-Ziq, Machinedrum, DJ Rashad and Luke Vibert. Squires also plays in Transatlantic Alliance, a post-rock group signed to Post. Recordings.