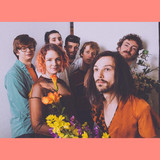 Music Jesus would listen to! Whatever kind of a groove you think makes a great night in the pulpit this lot have probably thrown it into their upbeat goodtime mishmash music. Seven self-styled groove gremlins from the back end of Manchester. Following a raucous live session for BBC Radio 6’s Marc Riley, the in-demand psychedelic jazz-pop oddballs performed at Glastonbury, Kendal Calling, Bluedot, Liverpool Sound City and Manchester International and Jazz Festivals, as well as a headline set at Latitude and an international slot at Mandrea Festival. The Casuals have shared the stage with artists such as Afriquoi, Omni, Natty, Hypnotic Brass Ensemble, and performed in iconic venues such as Gorilla, Hootananny Brixton, Brudenell Social Club, Band on the Wall, Sefton Park Palm House, as well as in polytunnels, museums, kitchens and on rooftops. “All over the place in the best kind of way” - Marc Riley, BBC Radio 6 "Bethlehem Casuals - unlike so many of their experimental peers - never sacrifice melodic concision in their pursuit for sonic adventure" - David Sue, Manchester Evening News “Sounds like a 21st Century hybrid of XTC and Steely Dan but in a very, very good way” - Tom Robinson, BBC Radio 6