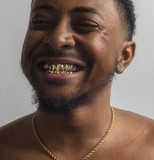 Representing Riverdale, a small suburb of Atlanta, Georgia, Deante' Hitchcock is a rapper who has demonstrated flexibility across his studio work and freestyle verses, as well as his performances with a live band. Hitchcock's career began in earnest as a teenager, when he released his debut mixtape, 19 Summers (2012). Additional independent tapes Wishful Thinking (2015) and Good (2016), combined with freestyle clips uploaded to social media platforms, helped build a following that spread beyond his native region. After an EP, Just a Sample, and the in-concert recording Good: Live (both of which arrived in early 2017), Hitchcock was boosted by signing with the RCA-affiliated ByStorm label, where he reintroduced himself with the six-track So Much for Good Luck (in October 2017). By that point, Hitchcock had been favorably compared to the likes of T.I. and J. Cole, though it was evident that he had a voice of his own, with a style capable of appealing to fans of both of those dissimilar artists. A string of singles carried him into 2019, including "I See It" and "Side N*gga Anthem." The second of a proposed trilogy of albums, Hitchcock released Better in 2020, featuring guest spots from Young Nudy, 6LACK, and JID, among others. ~ Andy Kellman, Rovi