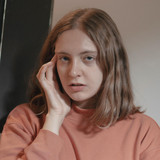 "Any Other is an international artist in every sense, not just in a literal capacity, but in her ability to chart human experience across foreign waters, demarcating losses that we recognise as our own. We should cherish her." – This is how Drowned in Sound describes the project of Adele Altro, Italian singer-songwriter, multi-instrumentalist and producer currently based in Italy. Her debut album “Silently. Quietly. Going Away” (2015, Bello Records) gets critical acclaim in Italy for the spontaneous indie-rock sound and the DIY attitude, and brings her on a long tour through Europe and UK. During the next three years, Adele starts working as a producer for other artists and as a session musician, both studio and live. Her sophomore record “Two, Geography” (released on September 14th, 2018) comes three years after Any Other’s debut. While her first work is heavily influenced by ‘90s indie, with a strong power trio sound, her second album is much more mature, complex and original. Adele writes, sings, plays, produces and arranges all of her songs, and gets praised both from Italian and foreign press (she’s named "Best Italian Female Musician" by Rolling Stone Italia), thanks to the emotional strength of the record and a new, more mature aesthetic, filled with jazz and orchestral arrangements.