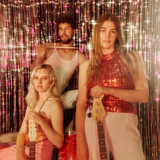 The earliest sketches of Wellington trio Mermaidens follows the story arc of how most bands start; through long-term friendship and bonding over music that shaped their salad days. For Mermaidens, it was an eclectic melting pot of PJ Harvey, Warpaint and Fugazi to name a few. Together, childhood friends Gussie Larkin (guitar/co-lead vocals), Lily West (bass/co-lead vocals) and Abe Hollingsworth (drums) form a powerful trinity of unwavering creativity and relentless work ethic. Their time together as Mermaidens has been a fruitful one; a timeline consisting of three critically acclaimed albums, releasing music on the iconic indie label Flying Nun Records, and a wide range of live supports that include Sleater Kinney, Death Cab for Cutie, Lorde, Mac DeMarco and The Veils. The band kicked 2021 off with a bang, announcing a nationwide tour and releasing the slow-burning anthem ‘Soft Energy’ – the video for which was exclusively premiered by Ensemble magazine. The single and tour come off the back of a 12-month period that saw the band host their first ever Mermgrown festival (to a sold out crowd, no less) and gain a nomination for Best Alternative Artist at the Aotearoa Music Awards. In addition to this, West took home the Aotearoa Music Award for Best Album Art (Look Me In The Eyes).