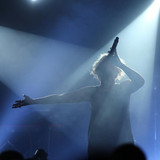 PHONODRIVE from Germany's Rhine-Main area has been around for quite some time. They've toured in Germany, Austria, Switzerland, the Netherlands, Sweden and Australia, released two albums and several DIY EPs, and contributed to international tv and film productions. With their new singles YOU'RE LIKE THE SEA, ANGELS CAN NEVER DIE, AUTOSCOOTER and METRO LIFE the five-piece is ramping up its engine again. And it seems to be running smoothly: Radio stations across the country (and actually on a considerable number of airplanes across the world) are already picking up on the --- „Rich, lush and exciting music drawing on influences from The Corrs, The Cardigans, and possibly even a hint of Dinosaur Jr."

(Gensub, Canada) --- „Pleasantly sensitive, lyrical, yearning and schmaltz-free songs.“ (DK, Journal Frankfurt) --- „incredibly catchy PHONODRIVE sound” (Kim Porter, Forte Mag, Melbourne). Next song in line is CRAZY WORLD, which you can already download prior to its official release when signing up to their newsletter (http://phonodrive.de/#newsletter)