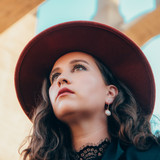 Kylie Rothfield is a force to be reckoned with. It’s no wonder her unique, soulful voice caught the ears of Alicia Keys, who described her as “a blossoming, powerful flower with so much heart, so much talent, so much emotion and vocal power”. Kylie is also an accomplished songwriter and guitarist. In 2015, Kylie signed her first publishing deal and has had her songs placed on ABC, NBC, MTV and E! Network. She has also been endorsed by Epiphone Guitars and has recently been featured on Epiphone.com, SheShreds, Bustle, Billboard and Rolling Stone for her performances. “Kylie absolutely blew me away. She interprets songs like a true artist and she could sing ANYTHING” - Faith Hill. Kylie will be continuously touring and recording new music throughout the summer/fall of 2019.