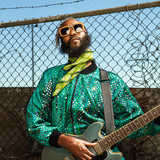 When you listen to Fantastic Negrito, you’re invited to hear the story of life after destruction. Each song is a real story about a musician from Oakland who experienced the highs of a million-dollar record deal, the lows of a near fatal car accident that left him in a coma, and is now in the midst of a rebirth that took him from the streets of Oakland to the world stage. Negrito burst onto the national radar by winning the inaugural NPR Tiny Desk contest in 2015, and has since won Grammys for all three of his albums: The Last Days of Oakland (2017), Please Don't Be Dead (2019), and Have You Lost Your Mind yet? (2021), which includes features from fellow Tiny Desk winner Tank (Tank and The Bangas) and Bay Area legend E-40. His latest singles are “Root City,” an anthem for the Oakland Roots Sports Club, and “Rolling Through California”, a rallying cry that calls for collective action in the wake of drought, accelerating climate change, and the growing calamity of California’s annual fire season. Outside of music, Negrito puts his socially progressive lyrics into action. His Storefront Market, a monthly marketplace free of charge to the public, features vendors representing the community of West Oakland and surrounding neighborhoods. He also runs his own farm on his Oakland property called Revolution Plantation where he teaches the surrounding community to garden — an effort to pass on practices that can sustain local neighborhoods and our planet alike.