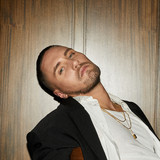 Patrik Jean is a Swedish artist and songwriter from Stockholm. Growing up in a big family, music quickly became his way to be heard. Throughout the last few years, while writing songs for other artists he has kept the most personal ones for himself. When the time was right, he started releasing those honest and emotional stories as an independent artist.   "I'm a bit of a control freak. Being independent has been a great way for me to be involved all the way from idea to release".   In 2021 we saw Patrik Jean in Swedens biggest TV show Melodifestivalen with his song Tears Run Dry. He has written songs with artists like Felix Jaehn, Sabina Ddumba, Soleima, Juan Magán and Chris Kläfford. Listen to more of his work on Written by Patrik Jean