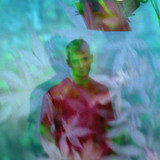 Mura Masa's influence is one which can be felt across the modern musical map. The Guernsey-born producer, songwriter and vocalist has already won his first Grammy (and been nominated for two more), been shortlisted for an Ivor Novello Award, named one of Forbes' 30 Under 30, and surpassed a billion streams. Along the way, he has confirmed his reputation as a chameleonic curator of global sounds; not only in his own solo material but in the emerging talent Mura Masa continues to develop (whether producing for Slowthai and Octavian, or remixing Koffee and Perfume Genius).