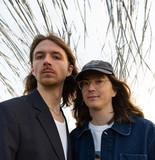 See you at Popaganda on the 9th of October!     It was the joint love for the subtle infectiousness of funk and the clear-cut melodies of the disco movement that served as the igniting spark for Carl Leanderson and Viktor Westerberg to create the singular disco project Tomode. Following a few formative years in the studio, Tomode has now kicked in the door to the new decade by releasing three singles, garnering features and interviews in the international indie blogosphere as well as radioplay from Swedish radio channel P3.   Their timeless and funky sound caught the attention of French esthetic indie label Riptide Records (Antoine Chambe, Eau Rouge, Matilde), which is releasing their debut EP Synergy on June 18 2021.