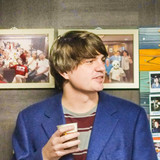 Alec Shea is a freelance sound designer, composer and voice actor for games and animation. Some of his soundtracks include Corpse Factory, Akedo: Ultimate Arcade Warriors and Yandere Simulator. He is also the creator of a collection of music for tabletop games, board games and pen and paper RPGs, like Dungeons and Dragons, Pathfinder, called www.tabletopmusic.com, and is also involved with a number of other musical ventures including a lo-fi album and a "Twitch Channel Anime OP" for his good friend AlphaWolfPaw.