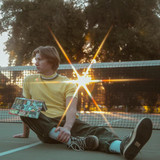 As Lostboycrow, Chris Blair fuses R&B, pop, and electronic music into smoothly soulful songs. After establishing his genre-bending style with streaming hits such as 2016's "Powers," he gave it a more ambitious scope with the Traveler EP trilogy and 2019's full-length Santa Fe. Growing up in the Pacific Northwest, Blair was into sports as well as music, and joined the high school choir while listening to pop-punk, screamo, and classic rock. Meanwhile, family vacations made him aware of the Crow Indians in Montana, and he became fascinated with their culture. He brought all of these influences together as Lostboycrow in the early 2010s and moved to Los Angeles in 2014. It was there that he met Flor bassist/producer Dylan William, who became one of his closest collaborators. He released his first track, "Adolescent," in December 2014 and followed it with a string of singles including "HiyHiy," "Start Something," and "Say You Want Me." Lostboycrow's debut EP, Sigh for Me, arrived in 2016 and featured two of his most popular tracks, "Powers" and the Skizzy Mars collaboration "The Lost Boy." That year also saw the release of "Where It All Goes," which was produced by William, as well as "Stay a Little Longer." During this time, Blair amassed a set of songs that he released as a series of three EPs. Traveler: The First Legend arrived in May 2017 and included the streaming hits "Real Name" and the Romeo and Juliet-inspired "Verona." Traveler: The Second Legend followed that October, and Blair completed the trilogy in early 2018 with Traveler: The Third Legend, which featured production by William and his Flor bandmate Zach Grace. At the beginning of the year, Blair and a small group of collaborators decamped to an Airb'n'b in New Mexico to make Lostboycrow's first full-length. The free-flowing sessions and desert landscapes resulted in Santa Fe, which arrived in early 2019 via Red Music/Sony. ~ Heather Phares, Rovi