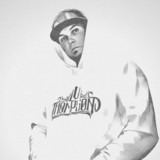 Ev Thompson is a hip-hop artist from Western Canada who has toured extensively across 4 Countries, 5 Canadian Provinces and 9 American States. Ev has two albums which charted numerous times in the National top 10 charts on college radio, and his single '3Peat' was played on Eminem's satellite radio channel, Shade 45, on the Lord Sear Special.   Ev has hundreds of shows to his credit and has played a number of festivals such as Canadian Music Week and New Skool Rules hip-hop festival in The Netherlands. He has toured consistently as a headlining act as well as being tour support for many accomplished artists such as: Jarren Benton, Merkules

Evil Ebenezer, Ghettosocks and Rel McCoy, LA rap legend Abstract Rude multiple times, as well as Scarub of Living Legends, and more. Ev has also shared stages with Tech N9ne, Mayday, Chris Webby, R.A. The Rugged Man, Rittz, Krizz Kaliko, Doodlebug of Digable Planets, Snak The Ripper, Moka Only, Swollen Members and many more.   Ev is well on his way to captivating a much larger fan base and solidifying himself as an artist to be taken seriously in Canada and across the world.