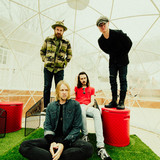 Led by singer/songwriter Jason Wade, Lifehouse emerged in the early 2000s with a commercial blend of pop/rock melody and throaty, post-grunge vocals. Wade, who originally tagged the band Blyss upon its inception in 1995, was raised by missionary parents in a variety of locales. He eventually settled in Los Angeles with his mother and took a keen interest in songwriting. Bassist Sergio Andrade lived next door, and the two spent hours in Wade's garage, fine-tuning their original compositions and laying the brickwork for Lifehouse's accessible sound. Those rehearsals paved the way for a self-released album, Diff's Lucky Band, as well as a series of shows at church worship services. Lifehouse resisted the temptation to become a full-fledged Christian band, however, and instead signed a contract with Dreamworks Records as an alternative rock trio. Drummer Jon Palmer completed the lineup. No Name Face marked the band's official debut in the fall of 2000. The album enjoyed double-platinum sales on the strength of "Hanging by a Moment," which was the most played radio track of 2001. In a market dominated by teen pop, Lifehouse stood out as champions of guitar-based music, and their unexpected success drew them back inside the studio to work on a follow-up album. With Brendan O'Brien handling production duties, Wade led his band through the recording of Stanley Climbfall during the spring and summer of 2002. The record was released on Dreamworks the following September, but it failed to match the sales of its predecessor. Lifehouse's lineup splintered soon after, with Andrade exiting the group to pursue alternate projects. Wade pieced together a revised Lifehouse and returned in early 2005 with a self-titled third album. For the touring that followed its release, Wade and percussionist Rick Woolstenhulme, Jr. were joined by former AM Radio bassist/vocalist Bryce Soderberg, who remained with the group for its return to alternative rock on 2007's Who We Are. Lifehouse and Who We Are proved to be fairly popular releases, with both albums going gold thanks to a trio of Top 40 singles: "First Time," "You and Me," and "Whatever It Takes." Smoke & Mirrors appeared three years later, sporting a collaboration with rapper/songwriter Kevin Rudolf on the leadoff single "Halfway Gone." Debuting at number six on the Billboard Top 200, Smoke & Mirrors was a successful record and, after a supporting tour, the group entered the studio once again with producer Jude Cole (he helmed S&M) to record its sixth album. Entitled Almeria, the record appeared in December 2012; it was preceded by the single "Between the Raindrops," a duet with pop singer Natasha Bedingfield. Almeria didn't make many waves on the charts -- it reached 55 on Billboard's Top 200, whereas Smoke & Mirrors peaked at number six -- and the group didn't support it with a tour. By the summer, Lifehouse announced they'd left their label and were entering a hiatus. Each member pursued their own project -- Wade worked on a solo album, Soderberg started a band called KOMOX, Woolstenhulme, Jr. played with the Goo Goo Dolls -- but by 2014, they had reunited. In May of 2015, they resurfaced with Out of the Wasteland, produced by Jude Cole and released by Ironworks. It debuted at number one on the Top Independent Albums chart. In early summer of 2017, Lifehouse released their first compilation, Greatest Hits, after which the band toured America with Switchfoot. ~ Andrew Leahey, Rovi