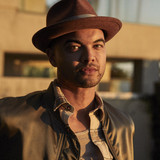 Singer Songwriter and Producer, Guy Sebastian is one of Australia’s most popular and successful male artists, since first exploding through our TV sets and into our hearts as winner of the inaugural season of 'Australian Idol' back in 2003. He is the only Australian male artist in ARIA history to have ever achieved 6 number one ARIA singles, and 3 number one albums. He has been awarded 7 ARIA awards, 69 Platinum Certification awards, 8 Gold Certification awards, and has performed for Oprah Winfrey, The Queen, and the Pope. His global hit ‘Battle Scars’ with Lupe Fiasco reached #1 on the US R&B/Hip Hop digital chart and peaked at #11 on the US iTunes Chart. The song is US certified platinum and was performed by the duo on The Late Show with David Letterman, Late night with Jimmy Fallon, on Conan & the ‘Play It Forward’ Grammy Foundation event in LA.

Guy has performed over 18 National Tours, 2 UK Tours, 1 European tour and 1 US tour. Guy is the only male artist and only Aussie artist to have had four songs in the top 100 airplay charts for 2020, sharing that statistic with Dua Lipa.