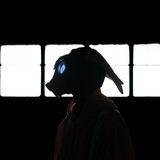 Car Seat Headrest began as a solo project of Will Toledo in 2010. Recording in cars, bedrooms, and other solitary spaces, Toledo self-released 10 Car Seat Headrest records during his college years. In 2015, after signing with Matador Records, Car Seat Headrest expanded to include Andrew Katz on drums, Ethan Ives on guitar, and Seth Dalby on bass.   Now 10 years in, the four-piece is starting fresh with their 2020 release, Making A Door Less Open. The album, which features their first new music in 4 years, also marks a shift in sound towards the electronic and the eccentric, and introduces a mysterious character called “Trait”, Toledo’s new alternate persona.