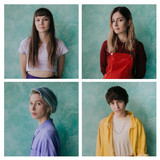 My Ugly Clementine is a four-piece, non-male rockband, telling stories about self confidence, self love, respect and equal rights. Early on being labelled 'supergroup' for their setup of well-known figures from the vibrant Vienna music scene, they are combining all this with being damn serious about one thing: having fun! Nevermind finally someone is brushing off all the dust from those old rock guitars and is fitting them right into the world of today. The brainchild of Sophie Lindinger (Leyya), the songwriter and producer gathered people around her that she always wanted to work with: The group now features Mira Lu Kovacs (of solo fame and as part of 5k HD), Kathrin Kolleritsch (aka KEROSIN95) and Nastasja Ronck (Lucid Kid). Their first show got sold out within 20 hours - whilst no one had even heard a single note of their songs. Their first single, "Never Be Yours" reached no. 1 on the highly infuential FM4 Charts, followed by a wave of songs that gathered high airplay and streaming numbers all across Europe as well as invitations to perform at festivals like Reeperbahn, Eurosonic or Ment - all of them within few months of the bands existence. Their 2020 debut album "Vitamin C" brought them widespread positive reviews and was named European Independent Album Of The Year 2020 by the European Indie Label Association Impala and won an Amadeus Austrian Music Award the same year.