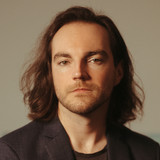 Glenn Thomas writes songs that cut straight to his truths. By putting his life and the human condition under the microscope, Glenn’s songs articulately observe the big questions with small details. Raised in a small New England town, Glenn writes with careful attention to his understanding of himself and the seasonality of life.   Glenn’s songs have been praised by press and songwriting veterans alike and have led him to perform across the country with national acts such as Langhorne Slim, The Barr Brothers, Blitzen Trapper, Eve6, Watsky, Rubblebucket, and many others.   His new LP Reassure Me There's A Window was released on May 15, 2020 via Palace Flophouse Records. The album, recorded in Nashville, was produced by Jordan Lehning (Andrew Combs, Rodney Crowell), and features session players like Old Crow Medicine Show's Charlie Worsham on mandolin, legendary harmonica genius Charlie McCoy, Spencer Cullum (Kesha, Miranda Lambert), and Austin Hoke (Dolly Parton, Cage The Elephant) on cello and singing saw.