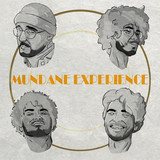 Mundane Experience is an alternative hip-hop group from Sweden, Lund. It consists of Samuel M Arfwedson, Jonathan Lundborg, and the brothers Chance Croall and Zachary Croall. The group likes to experiment with different styles within hip-hop. During the pre-pandemic years, mainly with an alternative old-school sound perfectly fit for their bumpy live shows. They started to play live in 2019 and have since then played at multiple venues, festivals, and radio shows in southern Sweden, including Grand Öl & Mat, Babel, Smålands Nation, The Tivoli, HX-festival, Tyrolen, Säljerydsfestivalen, P3, P4 and much more. The live shows are known to be high energy and the groove will loosen even the stiffest bodies. However, after over a year without live shows and self-isolation, the group has dipped their toes in the indie genre with their new upcoming EP "Blurry Notes" releasing August 8th. The product of this blend between indie and hip-hop remains true to their original style but with a deeper appreciation of the analoge. Featured on the EP is the vocalist Amanda Sandin, keyboardist Yoel Lind-Ruos and guitarist Ruben Sonesson. Pictures: @atravesdelvisor_