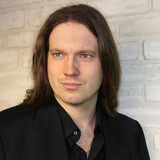 Ronny Matthes is a German composer and pianist.   He was born in 1979 in Eberswalde (Germany) and worked from 2006 to 2016 in Saxony's state capital "Dresden".   He wrote many piano pieces and classical arrangements. He also produced a large number of Christmas songs, which were published in the CD series "Special Christmas Songs" and "Die schönsten Weihnachtslieder".   His works were published through the label "Matthesmusic - Verlag, Vertrieb & Gemafreie Musik". His music is mostly marketed as "Royalty Free Music".   Background music for hotels and restaurants has appeared in the CD series "Background Music", as well as Chillout music in "Chillout & Lounge" and relaxation music in "Wellness & Relaxation".   Ronny Matthes left Dresden in the middle of 2017 and moved to "Bad Freienwalde", a small town near Berlin.   Since 2006, more than 100 albums by Ronny Matthes have been released.