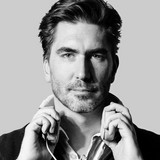 Born and raised around the streets of Lausanne, in Switzerland, Yannick Burky, AKA himself, started his musical journey when he was 19, when he discovered 16bit music on his Commodore 64. It was at this moment that Yannick Burky knew he wanted to be part of 'The Scene’. The Commodore scene to begin with, then the music scene. He first became interested in the electronic music scene in 1989. Later, he uses the turntables of his parents in secret. At the age of 22, he was organizing techno parties in rented theaters and schools. He did various warm up sets in open air techno parties and stopped all these things to work as a sales manager first, and finally created his own digital company who is a big player in Switzerland now. He also mixed in a 20 years old podcast every month until now. In 2016, he achieved his big break when Yannick Burky realised it was the time to return to its first love: Music.