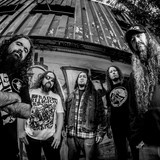 Recognized as the pioneers of the new wave of Chilean metal, Nuclear have forged an extreme sonic mixture of thrash, death metal and punk music. With eye-opening sociopolitical lyrical content, the band take their music to the extreme and have set a path into the future for new sonic experiments. Formed in 2003, Nuclear trafficked in the usual thrash metal fare in its first years, later becoming the living proof of the rare earth explosive compound that it’s known as today. "Murder Of Crows" (Black Lodge Records, 2020), the band's sixth studio album, follows the path traced by the successful "Formula For Anarchy" yet adds more distinctive elements to Nuclear's music, increasing harshness, violence and maintaining their uncompromising and unalterable principle to escalate brutality as years go by. With 6 studio albums under the belt and a nourished tour experience of 600+ gigs around the world and playing large and notable metal festivals throughout the past few years, the band have reliably stuck to their guns and believed no setback would break their will to pursue new objectives nor stop their ongoing momentum.