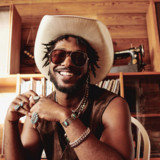 Rolling Stone boldly proclaimed Willie Jones “seems an awful lot like the future of country music.” The Penthouse / EMPIRE recording artist and Warner Chappell songwriter is a native of Shreveport, Louisiana.   His early musical interests spanned everything from gospel, pop and R&B but he gravitated towards the country and hip-hop vibes he proudly embraces since the age 14.   Possessing a gift for melody together with an authentic country voice are the cornerstones of his talents, as his lyrics speak to both traditional and a genre expanding audience. His metaphors and similes are fresh to country ears yet are entrenched in the core values synonymous with Country Music . In 2020, in conjunction with Apple Music, Jones launched his own radio show, Cross Roads Radio, that officially serves as the intersection of country and hip-hop. His highly anticipated debut album, Right Now, is releasing on January 22nd led by the patriotic anthem, "American Dream"