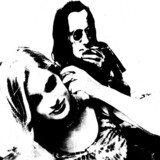 Children Of Dub was started by former Zero Gravity member Luke Eastwood. It began in '91 following a one off collaboration with Demian Castellanos and DJ Quark on what became the song "Journey to the Inner Light". In 1993 Luke joined forces with Zach (also from Zero Gravity)

playing at London's Whirl-y-gig. After some musical differences Zach left and Luke carried on alone until enlisting Katie Hecker (Ecstacy Of St Teressa, Revolution 9) as percussionist. Demian returned at times with writing, guitar and sax contributions as well as for touring, when not working with his own band (The Oscillation). Children Of Dub released many EPs and 5 studio albums, a USA/Japan only collection and a retrospective compilation (Evolution) in 2001 with Rumour Records. Their style varied from Ambient, to 70s influenced Ambient Dub, Trance, House, World Music & Jazz tinged Drum n Bass. The band had many tours of the UK and in Europe, with 3 of their singles making the upper end of the UK Independent Singles chart. A commemorative DVD ("Ambient") was released in 2015 on the 20th anniversary of the 1st album "The Silent Pool" and features most of their more chilled material. Some of their songs have been used in TV and film, including