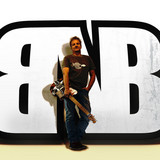 Bent Not Broken is a Munich-based rock project around singer and guitarist Jörn Kachelriess.

The latest release "Pretty Unplugged" from March 2021 came to life with a news report and a D minor chord. After watching the news about the US election campaign last autumn I woke up feeling devastated. Devastated how far it had come. Will it ever be possible to unite the people again? The same night I wrote the song called "America" and released it as a single two weeks later. As a side effect I rediscovered the beauty of an acoustic guitar. In January I fooled around with a Terz guitar and a D minor chord led to a sweet melody. A walk at my favorite river nearby gave the inspiration for the lyrics and song no. 2, "The River" was born together with the idea to record a handful of acoustic songs to ease the mind and make the best out of these strange times. And here comes "Pretty Unplugged", a Bent Not Broken mini album for a moody evening on the couch. Hope you enjoy the music while we start to get Pretty Electric again ;-). Bent Not Broken did release 2 full length albums so far: "To Whom It may Concern" in 2008 and "Same Planet Different World" in 2013.